This is probably the most popular gunkhole around the outer edges of Buzzards Bay and Martha’s Vineyard. To me, there are two different sections with totally different vibes. 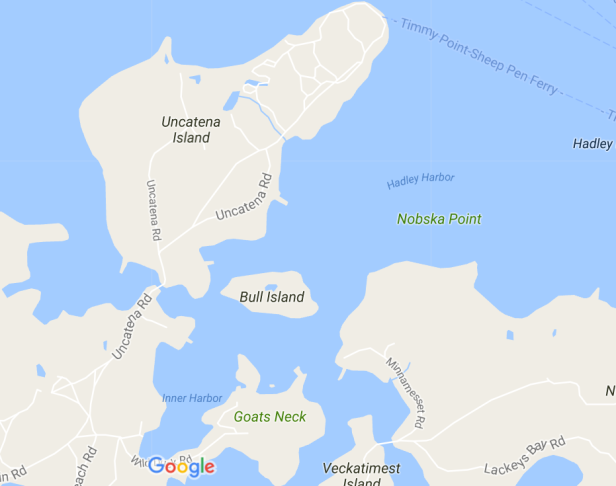 Most folks head here because it’s more of an adventure getting around the rocks and navigating the channel and all the boats moored or anchored. If you’re going on a day trip that includes swimming or planning to drop anchor and stay overnight, this is the place to be.

The downside is that it gets very crowded in the summer. Also, there is a ferry (The Cormorant) that goes for the very private Naushon Island “to the main land” for the islands very privileged residents (more on that later).

Finally, I have found that the landmass that protects the inner harbor can also make it rather stuffy on a warm summer day which is why I prefer the outer harbor.

Just before you get to Bull Island, you can bang a right and enter one of the most beautiful anchorages on earth. Here you can drop a hook near the world of the rich and famous. The mansion in the photo above is owned by The Forbes Family, who owns Naushon Island lock, stock, and barrel.

This is the old money Forbes’ not to be confused with new money Malcom Forbes; these are real deal Mayflower types.

I prefer the outer harbor simply because it feels more special and unlike the inner harbor, a lot less touristy. On top of that, the views are unmatched; great site lines into shallow coves, the northern coast of Buzzard’s Bay, and Woods Hole.

But most of all, that mansion on the hill!

The most famous member of the old money Forbes family is none other than former Massachusetts Senator and Secretary of State – John Forbes Kerry.

Imagine my delight last July when I spotted Kerry’s yacht – The Isabella, anchored just off the mansion. The funny thing was that Johnny boy’s 76′ custom yacht didn’t look at all out of place among the other yachts anchoring.

Here’s a somewhat satirical piece that appeared in The National Review back in 2004 when Kerry was running for president that chronicle’s the entire affair.

Naushon Island, off the Massachusetts coast, has been known as the home of pirates, who confiscated the hard-earned wealth of merchants and businessmen; sheep, obedient creatures who demonstrate no independence; ticks and flies, droning annoying pests; and is rumored to be haunted by frightening, ghostly pale, gaunt figures. It is also a family home of John Kerry; readers can decide for themselves whether he constitutes a redundant addition to that list.

Seven miles long and about 5,000 acres, Naushon is the largest and most unspoiled in the Elizabeth Islands chain, just northwest of Martha’s Vineyard and Chappaquiddick. The only year-round settlement in the chain is the town of Gosnold, on the outermost and lone public island, Cuttyhunk.

In its history, Naushon has been owned by only three families; the family of the first governor of Massachusetts colony, the Winthrops, the Bowdoins, and the Forbeses for the most recent 148 years.

The Forbes family maintains about 30 homes on Naushon, and hundreds of Forbeses and their guests vacation there in the summer. The public can boat near it, but not land. Today, a mounted groundskeeper patrols the shores, and politely asks trespassers to leave–though some trespassers are allowed to finish their walk and urged to get permission before landing again.

“In order to preserve the owners’ privacy and maintain the islands in the face of campers, litterers, thieves, arsonists, hunters, and others, they are all strictly no trespassing,” wrote Naushon Shareholder David Gregg in a letter to a kayaker in the mid-1990s. (Arsonists?)

Only caretakers and sheepherders live on the island year-round. Employment with the Forbes does not appear to be a road to wealth: According to 2001 state Division of Employment and Training figures, the entire 2001 total payroll for Gosnard was $782,801 at eight establishments with a total of 51 employees, for an average income of $15,349.

In a policy that would make Al Gore proud, no vehicles are allowed on Naushon, and residents and guests travel by foot or by horseback or via antique horse-drawn carriages.

Periodically, Kerry talks about his ties to the island, his memories of family gatherings during his childhood, more recent experiences windsurfing off its coasts, or asserting his brotherhood with sportsmen by recalling adventures with his cousins shooting deer there. Kerry took Joe Klein for a speedboat ride off the island during the summer of 2002, perhaps the perfect interview backdrop for the senator’s glowing profile in The New Yorker.

One can picture the lanky teen Kerry, wandering the steep, grassy hills that observers compare to Scottish highlands, contemplating deep thoughts while standing atop a high cliff overlooking rocky beaches and crashing surf. Between the mansions of wealth and class behind him, and the stark landscape before him, the atmosphere must have felt like a Charlotte Bronte novel.

In Kerry’s 1990 Senate campaign, his opponent Jim Rappaport charged that the senator’s “family trust” was receiving a tax abatement because the island is used for agricultural purposes, allowing the trust to pay $300 in annual taxes instead of $12,000. Kerry’s spokesman responded that the island was owned by a trust set up by distant relatives on the Forbes side of his family, and that the senator is not a beneficiary of that trust. Kerry insisted that the island was just a family vacation home, not a formally owned property.

The Forbes of Naushon made their fortune in transoceanic trade in the 19th-century, including exchanging opium from Turkey for Chinese tea and silk. (The late financier Malcolm Forbes and his son, former presidential candidate Steve Forbes, are not related to this Forbes family.)

Although Kerry and Teresa Heinz enjoy the island privileges, neither he nor many other of the Forbes of his generation inherited vast wealth from their forebears.

Kerry’s mother, Rosemary, was one of those Forbes of moderate means; his father Richard was a foreign-service officer stationed in Paris, Oslo, and Berlin. The wealthier relatives helped pay for Kerry’s boarding school in Switzerland and later helped the family pay for Kerry’s tuition at St. Paul’s in New Hampshire, a prestigious classic jacket-and-tie New England private school.

Kerry’s ties to the Forbes side of his family make for fascinating speculation. His upbringing was far from impoverished, but he was constantly surrounded by old money and pureblood Brahmin aristocracy. His family had a 52-foot-sailboat; the other kids had yachts. He was a Democratic Catholic; the campus of St. Paul’s was almost entirely Republican Episcopalians. Kerry’s peers reportedly perceived him as being “too ambitious” for a Forbes.

One wonders how Kerry was affected by being identified as a mere half-Forbes in the part of the country that put the most emphasis on inane aristocratic concepts of ‘good breeding.’

“It used to be said that, socially speaking, Philadelphia asked who a person is, New York how much is he worth, and Boston what does he know,” wrote Cleveland Amory wrote in his 1947 book , The Proper Bostonians. “Nationally it has now become generally recognized that Boston Society has long cared even more than Philadelphia about the first point and has refined the asking of who a person is to the point of demanding to know who he was. Philadelphia asks about a man’s parents; Boston wants to know about his grandparents.”

At school, Kerry faced a reception more complicated than racism or snobbery, according to Douglas Brinkley in his gushing review of Kerry’s time in Vietnam, Tour of Duty.

“His fate would have been simpler in fact, if he were born an African-American from Atlanta or an Okie from Tulsa,” Brinkley wrote. “Such clear anomalies at St. Paul’s would have been accepted as legitimate outsiders, intelligent flukes of nature trying against ungodly odds to join the Eastern Establishment.”

Rather than living the simple life of a black Atlantan in 1958, Kerry soldiered on as the poor outsider among the Brahmins, eventually dating Jacqueline Kennedy’s half-sister, Janet Auchincloss. Through her, he was invited to go boating with President and the First Lady in 1962.

“If you look at those pictures of him with JFK on the boat, he looks kind of uncomfortable,” says Howie Carr, Boston radio-show host and the Godfather of Bay State Kerry-watchers.

“It’s not like Clinton shaking hands with Kennedy at the White House, looking like, ‘Hey, baby, this is where I belong.’”

Perhaps the weekends spent at Hammersmith Farm in Rhode Island, which was serving as the summer White House, seemed too much like the family gatherings at Naushon–Jay Gatsby, masquerading among the privileged classes.

Regardless, Kerry eventually made peace with the world of wealth and lineage. He hosted two visits by the Clintons to Naushon in 1993 and 1994, with the president contributing a White House baseball cap to the informal “Presidential Hat Museum” that the Forbes family maintains in the main mansion on the island. Local lore claims the mansion is haunted by “ghosts of former Massachusetts governors.”

There is no word on whether any of the ghosts have been glimpsed driving a phantom tank in pre-production Kerry for President campaign commercials.

If you’re looking for a great gunkhole and want to brush elbows with America’s royalty, head out to Hadley Harbor, drop an anchor, and pop the Chardonnay!

One thought on “Hadley Harbor”