2000 was a very good year for the Horne Family. We were living in The Bay Area, I was doing very well in my job, and able to take a 6 week sabbatical in Mattapoisett for the Summer.

With a few stock option bucks burning a hole in my pocket, I decided to go to a Boat Show at Jack London Square in Alameda California just to look around.

I had always loved a boat show as a kid and once I got inside, my imagination started to run wild. Before I new it, I had found the Boston Whaler exhibit and I started grinding numbers in my head. Within a week, I was on the phone with Larry Russo Jr. negotiating to buy a Boston Whaler 26′ Outrage without a seatrail or even seeing it in person.

My 6 week sabbatical began the last weekend in June and that’s when I had Larry deliver the Whaler. The ramp in Mattapoisett was closed for repairs, so I asked Clyde to join me for the launch and the delivery home from Wareham.

Before I get into the ride, a short, but very sweet story…

I was always at the forefront of digital music and having missed Father’s Day, I decided to give my father a home burnt CD with songs that I thought he’d like (mostly Johnny Cash).

The first song was “Across the Wide Missouri” by The Kingston Trio and Clyde immediately said “That was my favorite song in the 50’s, I wore the grooves out of the record”. I never knew that, but I knew that I loved the song and suddenly I knew why; as a kid I must have heard Clyde playing it over and over again.

Anyway, I digress. The brand new Whaler was beautiful sitting on the trailer. And since the last outboard I’d been on was our 15′ Thunderbird, it also looked huge. It was kind of a crappy day, but she actually ate up the 2 foot head sea chop all the way back to Mattapoisett. It was a great day for me and my dad.

– Gordon Lightfoot The Wreck of The Edmund Fitzgerald

My fuzzy childhood memory never recalled a day that was too rough to go out in the 15′ Thunderbird, so why worry about the size of the waves in my huge 26′ Whaler?

Our first trip on the Whaler came with our dear friends – The King Family. It was a typical early July day on Buzzards Bay – bright sun and fairly calm in the morning, so we decided we’d go to Martha’s Vineyard.

All went well until we were pulling into Vineyard Haven looking for place to tie up when the VHF started blaring a very panic’d women screaming Mayday. Kay immediately got nervous and her anxiety was picked up by Mrs. Horne and the girls.

No problem for us, but no dockage in Vineyard Haven, so we moved on to Oaks Bluff where we discovered the town mooring and the launch. We had a great day and headed back to Mattapoisett around 2:30 – a near fatal mistake.

The Whaler had a big bow and the girls (Karli and Natalie) were sitting up there as I took her up on a plane heading out around East Chop. Suddenly, I see both the girls go flying in the air as I hit my first 4 foot wave; then another, then another, and all the women start screaming.

I slowed down to stop the pounding just as the 4-5 footers turn to 6-8’s. I’m not even doing 12 MPH and we’re taking green water over the entire boat ever 15 seconds. All three bilge pumps are running nonstop and we still have 6 inches of water standing near the stern.

It’s probably 70 degrees out, but it’s blowing 30 and we’re soaking wet, so everyone’s freezing. Fortunately, I remember buying Clyde a heavy hoodie at The Black Dog store, so I grabbed it and put it on. I was still scared, but at least In was dry.

Now, my instincts took over and despite cries from all the girls to turnaround or call get on the VHF and call the Coast Guard for help, I focused on steering up and around each crashing wave and I said “Don’t worry, I’ve got this, just hang on and duck when the waves hit”.

At 12 MPH, it took about 45 minutes to reach Woods Hole, but like Gordon Lightfoot’s lyrics, it felt like hours. The funny thing was when we got to Buzzards Bay, the wind was still howling, but waves were only about 3′.

We got home safely and after hot showers and a change into dry clothes, we enjoyed a great dinner at The Mattapoisett Inn.

After all our trips back and forth to the Vineyard, we only saw similar monster waves once. We were on Mean Kitty with Natalie’s girlfriends from San Diego. I did some research and discovered that it regularly happens when we get the right wind and tide change. 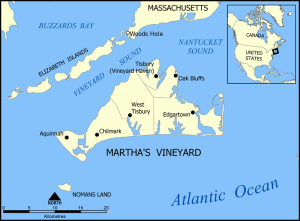 Cape Cod happens to be the point where the North Atlantic meets the Gulf Coast currents. This is why the ocean is always 10-15 degrees colder inside Cape Cod versus Buzzards Bay.

It’s also why the tidal currents in Woods Hole and the Cape Cod are so wicked.

Anyway, if you look at the shape of Vineyard Sound, you can see how it’s kind of a funnel between Tisbury and Woods Hole. And this is exactly where we hit the monster waves.

After we got Mean Kitty, we started going to Edgartown instead of Oaks Bluff. I also discovered that I could avoid most of the monster waves by heading straight out of Edgartown toward Hyannis for a few miles before turning west to woods hole.

The Whaler wasn’t really a Buzzards Bay boat, but we sure had a lot of fun with the kids tubing around Aucoot Cove.

By 2007, the Mercury Optimax’s were starting to fail on a far too regular basis and it was time for a proper Buzzards Bay Boat.

11 thoughts on “Does Anyone Know Where The Love Of God Goes When the Waves Turn The Minutes to Hours?”