A few weeks ago, I was getting a little sad thinking about the 2018 boating season coming to an end. But as Mrs. Horne and I ventured over to Oak Bluffs Sunday I realized that my sadness was gone. At this point in the season, every second on the water feels like bonus time!

We were originally planning on one last cruise – maybe even Friday and Saturday night in Provincetown, but once Matt Noyes (our NECN Weatherman) predicted the tail-end of Mega Storm Michael would pass just south of Nantucket on Friday morning, we canned that plan. Ironically, by 2:00 on Friday, Buzzards Bay was flat and the sun was shining, but we had already moved on…

A one-nighter was still alive and we kicked around meeting our friend Wayne in Warwick, visiting the Seafood Festival in Newport, or trying out a new restaurant – Ocean Road in Vineyard Haven.

Alas, Saturday morning was gray and rainy. Clinging to the last gasp at an overnight cruise, Mrs. Horne and I waited until 1:00 make the go/no-go call. The call was no-go and we ended up at Turks for an early dinner instead.

Sunday came with early sun, flat seas, and a typical October chill in the air. As much as we love Vineyard Haven, the fact is the lunch venues are fairly limited. The Black Dog only serves brunch until noon and then closes til 1:00. This leaves the Copper Wok and neither of us was feeling particularly Chinese.

After a quick visit to yelp, I zeroed in on Park Corner as a great new restaurant to check out on Oaks Bluff.

One of the nicest things about Mattapoisett Boatyard is how they treat us at the beginning and end of the season. They have one slip big enough for Vigilant and they let us use it before and after the long-time customers show up. They also let us leave the boat in the slip until we head to California, just in case we want to take a last minute cruise – as we did at the end of 2017.

Even though Vigilant will still be in the water when we jet west, we still need to take everything off that might go bad over the winter. This means all cloth items (that might become mouse nests), any food, and anything liquid that might freeze.

Before we headed out on Sunday morning, we spend an hour loading up the SUV with everything she could hold.

About 11:00, we tossed the lines and headed southeast toward Woods Hole…

It was a beautiful autumn day, but a tad chilly. In fact, at the time of this photo, it was 53 degrees out. Mrs. Horne was in a “cool mood” and wanted the windows open. I quickly froze my butt off!

Thankfully, I remembered to bring along a very warm vest that Turk’s owner Richie had given me Saturday night… 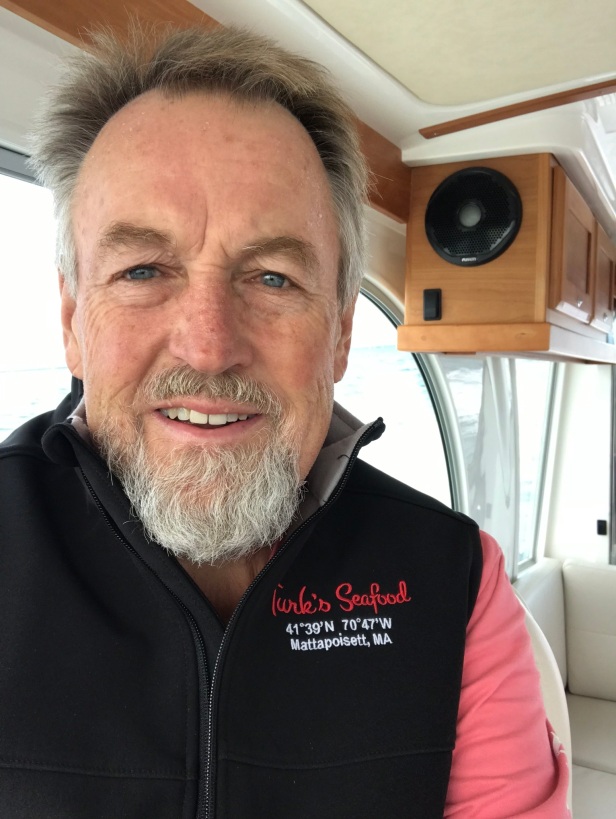 As I have mentioned here before, we avoid Oaks Bluff in the summer because it’s just too crazy. That said, I think it’s my favorite off-season destination. Even last weekend, The Ritz had live music starting at 7:00 PM on Saturday!

By the way, I just pulled into a slip I liked and after tying up, I checked in with the dockmaster, told him where I parked, and he said “fine, no problem…”

Although the mooring field was pretty much empty…

If you’re looking for a place to meet up with other boaters in the offseason and have a little party, this is great spot. In fact, there were a number of boats tied up next to us that were having a party on the back of “Chill-N” out of Bourne.”

I’m fairly certain those cups with the celery stalks sticking out were probably Bloody Mary’s and the grill was smoking.

I asked them if I could take their picture for my blog and they said “sure.” Then they asked what my blog was and after I told them, they shouted out “We Love My Buzzards Bay.”

We headed over to Park Corner for lunch. As soon as we got there, I noticed that the screen door and the windows were open. It was still in the low 50’s. I said to Mrs. Horne, “I don’t think I can eat here, it’s too cold.”

In case you don’t know, cold restaurants are one of my pet peeves. I now avoid Benjamin’s and Meg’s Aussie Milk Bar in Newport in the early and late season. Both leave their doors open in the morning. I guess it makes it more comfortable for the cooks, but not me. I chill easily and I hate eating cold food.

Mrs. Horne chided me for being a wimp, so we checked in at the front and were told “it’ll be at least 45 minutes.” So, as cold as the restaurant was, it was clearly “hot” with the OB crowd!

Back to The Lookout

We said “no thanks” and headed down Kennebec street. I was determined to find a warm restaurant and tried to steer Mrs. Horne toward Martha’s Vineyard Chowder Company (I recalled an open fireplace). She insisted on the Lookout, so there we went…

The beer was cold, the food was great, and with the plastic windows up, the room was toasty. I ordered a fish sandwich without the bun (my way of getting a mini-meal)…

It wasn’t bad, but the piece of fish was clearly designed to sit between two toasted buns. Mrs. Horne ordered a Caesar Salad and Mussels…

It tasted far better than it photographed! The salad was huge, the mussels plump, and the broth in the bottom of the bowl was killer! Thankfully they gave us a couple of pieces of garlic toast to soak it up with!

As we were eating, a couple of Lobster Rolls were delivered to the table next to us. I jumped up and asked if I could take a photo (much to Mrs. Horne’s chagrin). 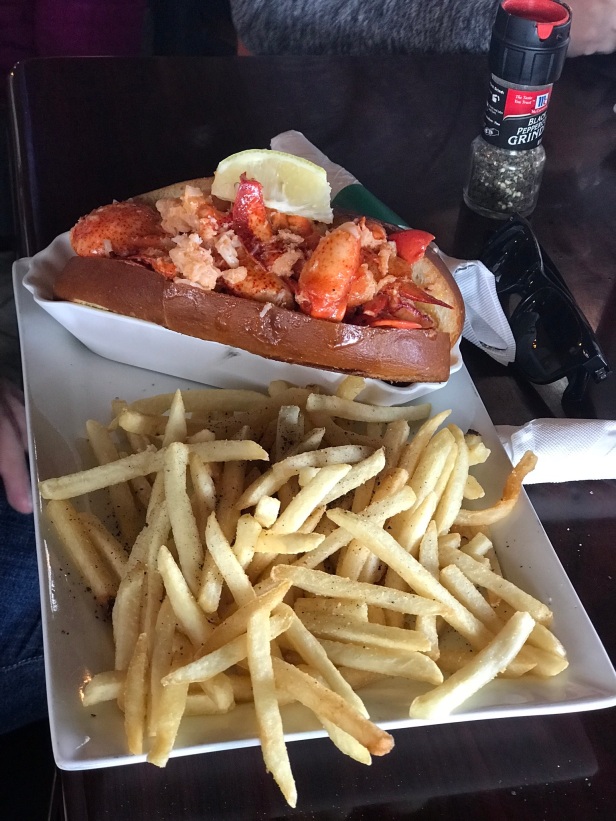 Once again, my photo doesn’t do this feast justice. The roll is a classic hot dog bun in shape, but probably double the normal size. There is easily a full lobster stuffed inside and it was prepared “Connecticut Style” – tossed in butter.

Once we saw the beautiful Lobster Rolls, Mrs. Horne said “can we have Lobster tonight?”

I immediately dialed Turks and order 2 steamed two-pounda’s for a 6:00 PM pick up. Since we’re leaving for California in a week, the cupboard is a tad bare. I did a quick mental inventory and realized we’d need some bread for dinner. We headed back up Circuit Avenue to the bakery.

Although Oak Bluffs was still buzzing, it was clear that October 14, 2018 was the official end to the tourist season. Everywhere looked we saw signs of the fading season…

We did talk to a local who pointed out that Martha’s Vineyard had 17,000 year round residents so some businesses stayed open during the winter, but clam bars, fudge shops, and even the bakery were closing til April. 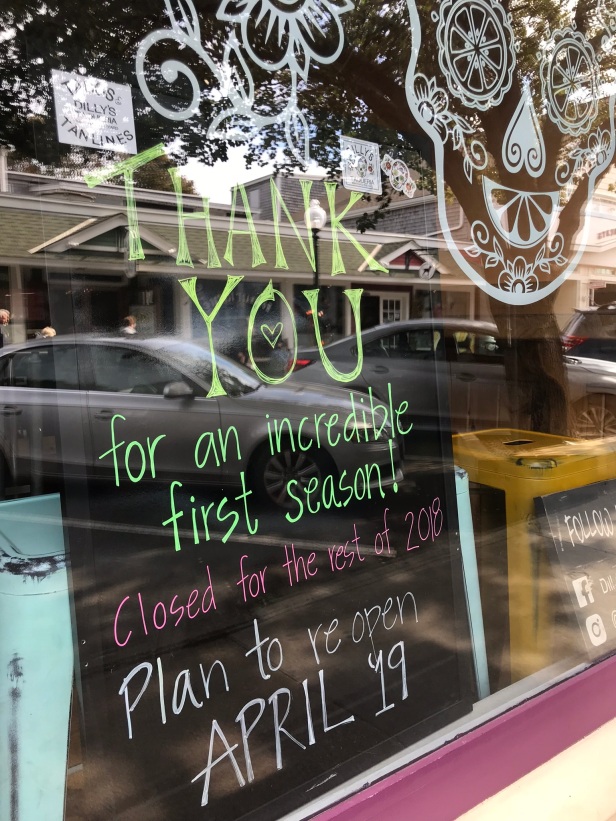 We scoffed our Ciabatta loaf and a couple of half priced desserts and headed back to Vigilant. The Chill-N was still sitting in its slip as we pulled out of OB for the last time in 2018. By now the sun was shining and the air was in the mid 60’s. I eased it up to 10 knots and cruised north toward Woods Hole taking in the end of summer…